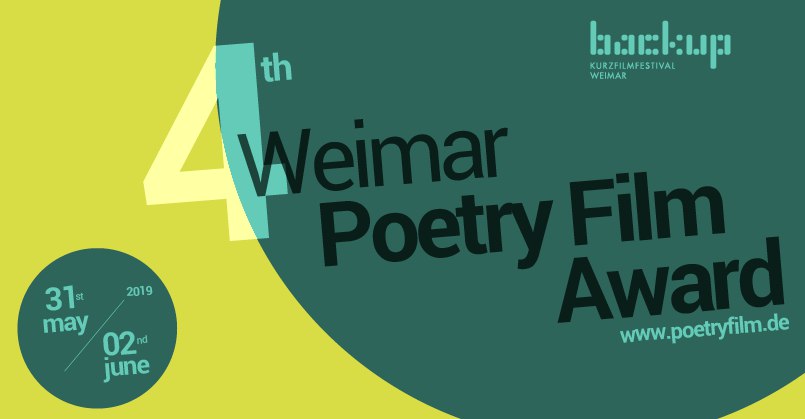 We’re happy to announce the International Premiere of Verses&Frames at Weimar Poetryfilm Award. This year the festival has a focus on Ibero-American videopoetry, with two main events in its program.

The opening of the festival (Friday, Mai 31st at Lichthaus Cinema) will consist on a screening of videopoetry from Spain and Latin America. Among them, there will be some complete works from videopoets who are part of Verses&Frames: Eduardo Yagüe, Miriam Reyes and Yolanda Castaño.

After the screening, there will be a debate focused on how to improve visibility and perception of videopoetry in Latin America. Guests will be: Timo Berger (Berlin), Luis José Galvis Diaz (Colombia) Sonja Hofmann (Colonia), Belén Montero (España), Celia Parra (España) y Cecilia Traslaviña (Colombia)

As the closure of Weimar Poetryfilm Award, on Sunday June 2nd at ACC Gallery there will be a screening of Verses&Frames, a documentary directed by Belén Montero, codirected by Juan Lesta. The screening and latter debate will be presented by director Belén Montero and executive producer Celia Parra.

Both members of Verses&Frames’ team also participate at some other main events of the festival. As a specialist in videopoetry, Belén Montero is part of the international jury who will select the winning videopoems, along with Timo Berger and Sonja Hofmann. The award ceremony will be on Saturday, June 1st at Cinema Lichthaus. The event will be opened by a performance by Celia Parra, who will read in Galician (with English subtitles, thanks to Patrick Loughnane’s translations) soem poems from her last book “Pantallas” (screens) accompanied with videoart.

Debates on videopoetry, ‘the cinema of poetry’, presentations of international cooperation projects devoted to poetryfilmmaking and plenty of screenings complete an amazing program that will bring together videopoetry fans at Weimar.